Emails are sent to large numbers of users simultaneously in an attempt to “fish” sensitive information by posing as reputable sources—often with legitimate-looking logos attached. Banks, credit card providers, delivery firms, law enforcement, and the IRS are a few of the common ones. A phishing campaign typically shoots out emails to huge numbers of users. Most of them are to people who don’t use that bank, for example, but by sheer weight of numbers, these emails arrive at a certain percentage of likely candidates.  These emails are sent in attempt to fraudulently acquire personal information, such as usernames, passwords, social security numbers, and credit card numbers, by masquerading as a trustworthy entity, such as a popular social web site, financial site, or online payment processor; often directs users to enter details at a fake website whose look and feel are almost identical to the legitimate one. 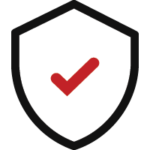 *Google will blacklist sites that could be considered dangerous to visitors, which makes it nearly impossible for people to find you. We identify and resolve any blacklisting issues, so there’s no interruption to your business.